The Best Places to Photograph in New Brunswick, Canada 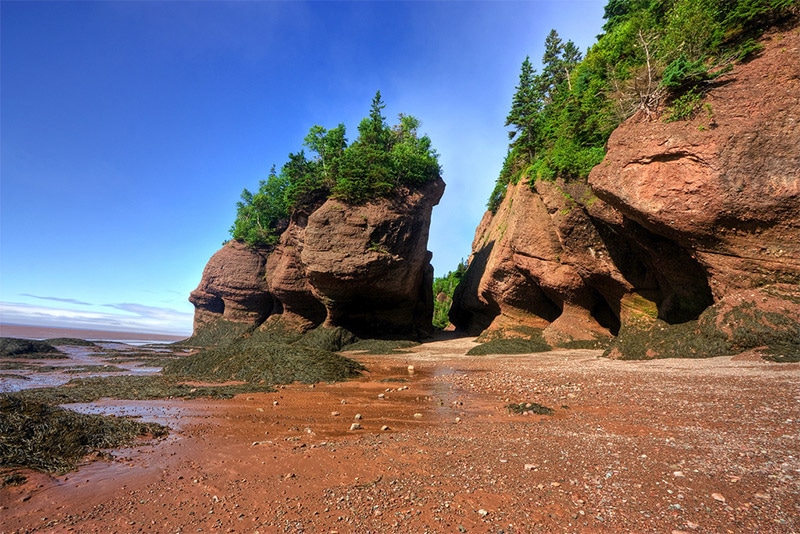 New Brunswick is one of the three Maritime Provinces, along with Prince Edward Island and Nova Scotia. It is northeast of Maine, making it a great destination for those who live in the northeast United States.

Photographers will find plenty to love about New Brunswick. The Bay of Fundy has a ruggedly beautiful coastline and many waterfalls in the area. The Gulf of St Lawrence also borders New Brunswick and presents plenty of opportunities.

On this page you’ll find a description of many of the best places to photograph in New Brunswick. We’ll updating and adding to the page over time, so please feel free to leave your own suggestions in the comments. The interactive map below shows the locations mention on this page.

Fundy National Park is located along the Bay of Fundy, near the town of Alma. This extraordinary park features a rugged coastline, more than 25 waterfalls, forest, and plenty of trails to explore. The coast looks drastically different depending on the tides. At high tide the water level is about 15 meters higher than low tide. At low tide you can walk out onto the sea floor. You can also use a kayak to get a different perspective of the park. 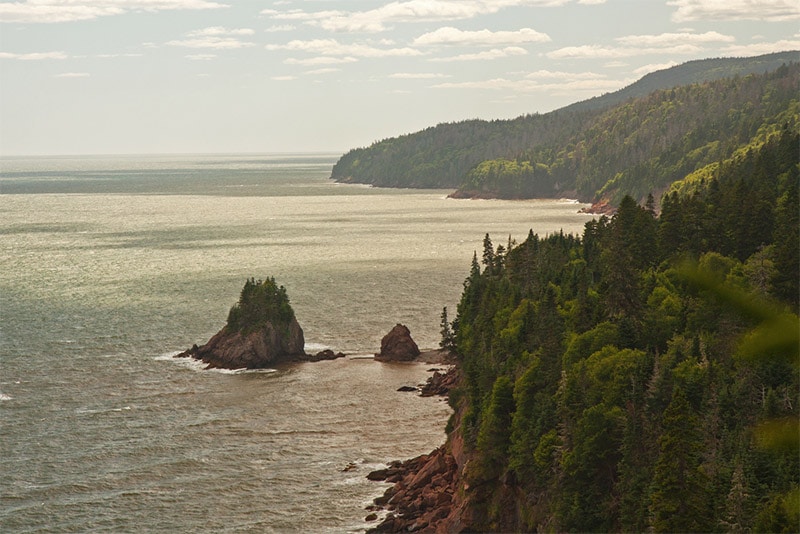 Dickson Falls is the most popular waterfall in Fundy National Park, and there is an excellent trail for those who want to explore the area. On the easy 1.5 km trail you’ll find plenty of picturesque nature along Dickson Brook and in the forest. The trail can be accessed from Point Wolfe Rd. 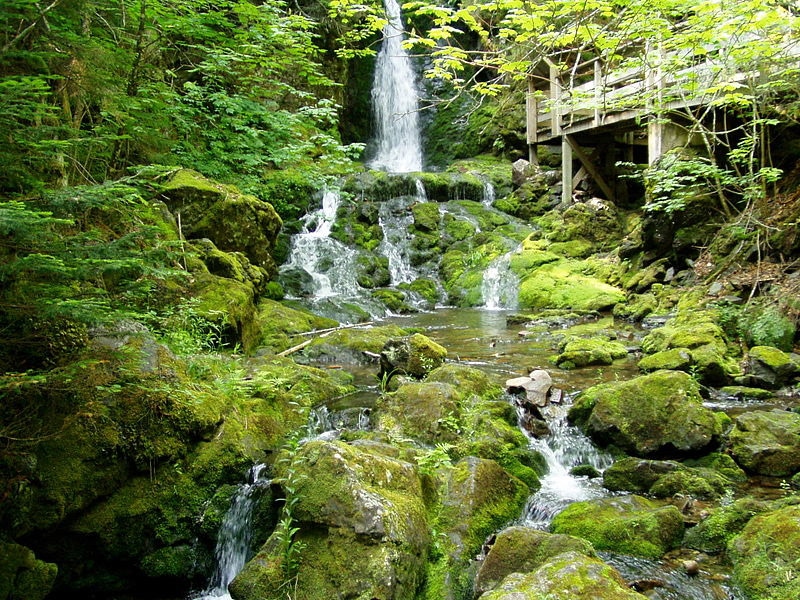 At 16 meters, Third Vault Falls is the highest waterfall in Fundy National Park. To reach the falls you can take the 3.7 km (each way) trail. The trail is level in some areas, but steep in other areas. There are stairs in places to make it easier. 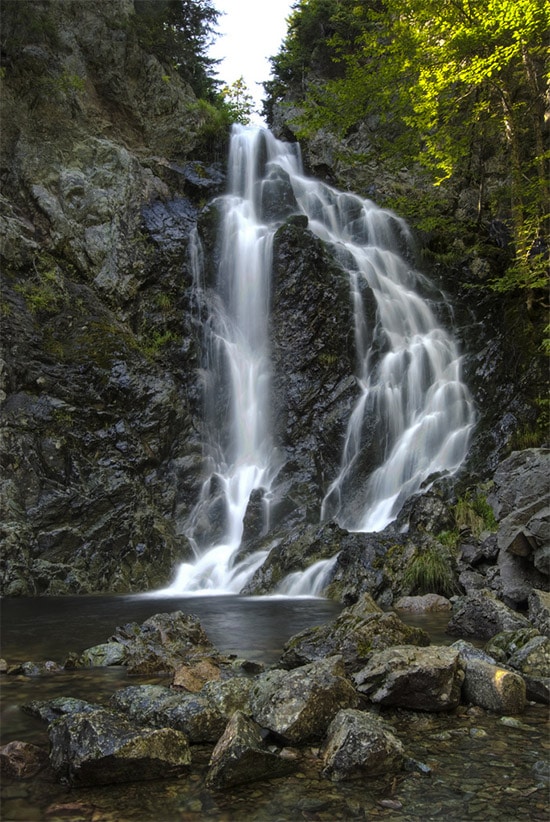 The Moosehorn Trail is about 7 km long and within Fundy National Park. It offers great river and waterfall views. 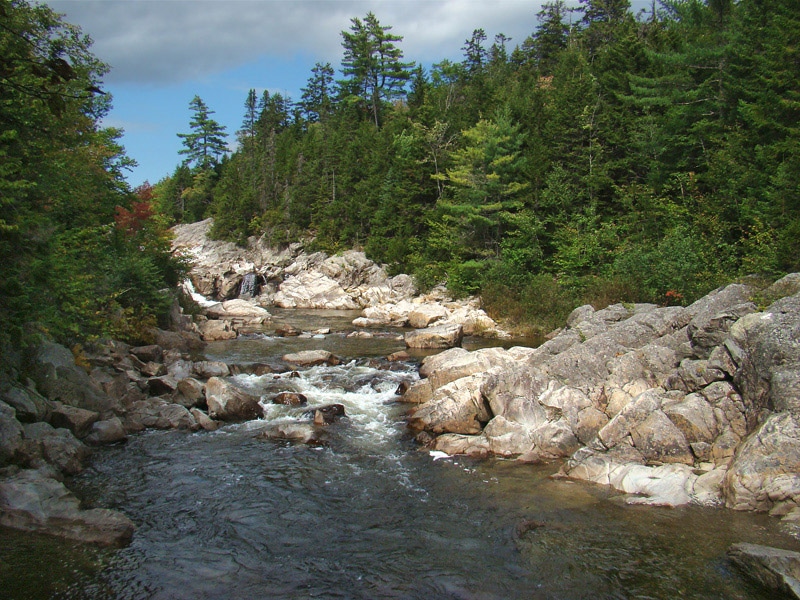 Laverty Falls, also within Fundy National Park, is a beautiful 12-meter waterfall. The trail to the falls is about 2.5 km each way, or you can turn it into a loop hike by combining it with the Moosehorn Trail. 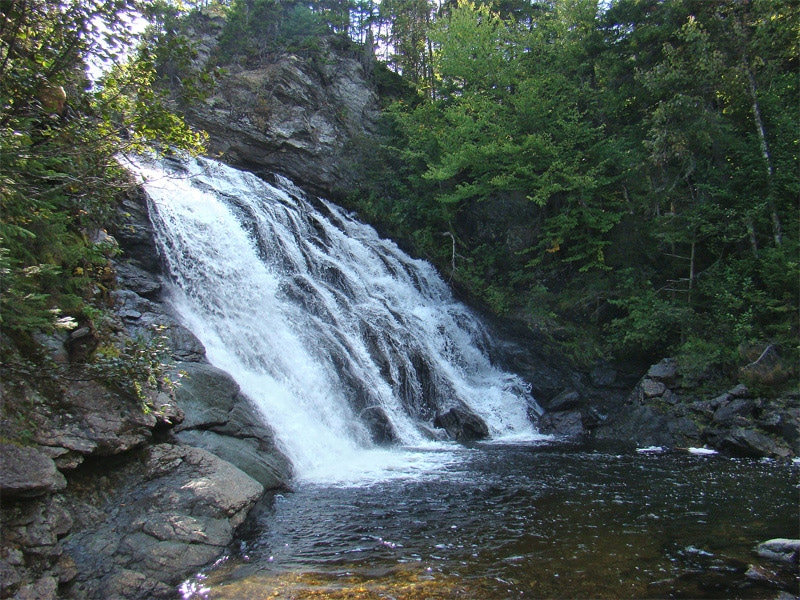 The Point Wolfe area of Fundy National Park includes a campground, covered bridge, beach, and a river. There are some great views here, as well as trails to explore on foot.  This is about 5 km from Dickson Falls. 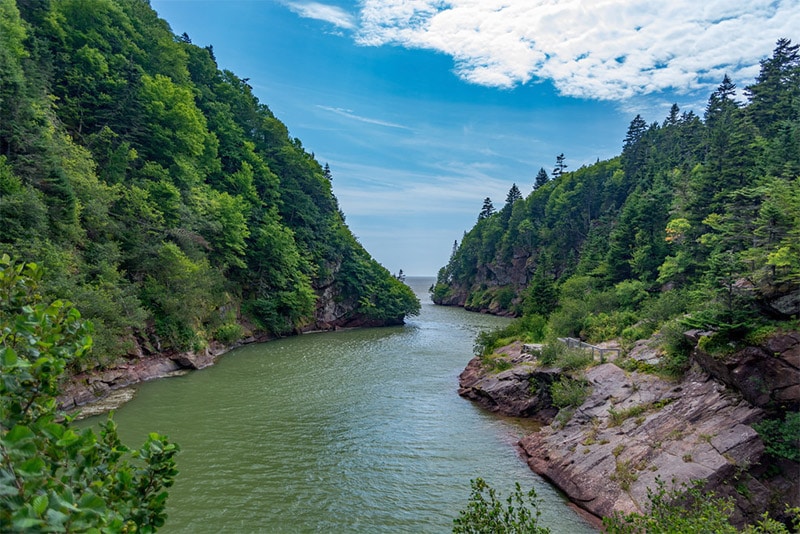 The Hopewell Rocks, also known as Flowerpot Rocks, are about 40 km northeast of Fundy National Park. The 40-70 foot rock formations are impressive at low or high tide. At high tide the bases of the rocks are submerged, but for several hours around low tide you can walk the beach and explore the rock formations. You can also kayak around these rock formations. This area is managed as part of a park, and there is a fee to enter the park. Tide information is available on the park’s website. 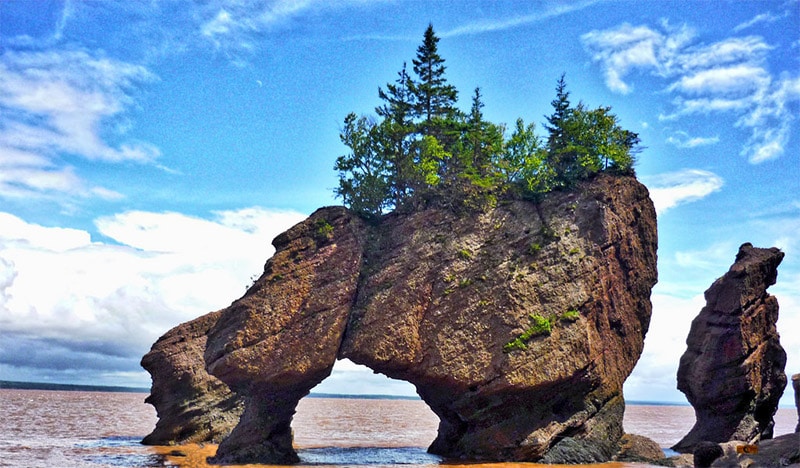 Mary’s Point is on the Bay of Fundy. It features mud flats that are exposed at low tide. This area is part of the Shepody National Wildlife Area and is an important area for shorebirds.

Grand Manan Island is in the Bay of Fundy, south of mainland New Brunswick and is only about 15 km off the coast of Maine.  This island features a beautiful, rugged coast with very high cliffs at some places. Most of the island’s residents live on the eastern side, while the western side is mostly undeveloped. The island can be accessed by boat or airplane. A ferry runs daily, and more frequently in the summer.

“Hole in the Wall” is a popular rock formation in North Head. Southern Head features high, remarkable cliffs. There are also plenty of trails throughout the island for hiking and for ATVs. 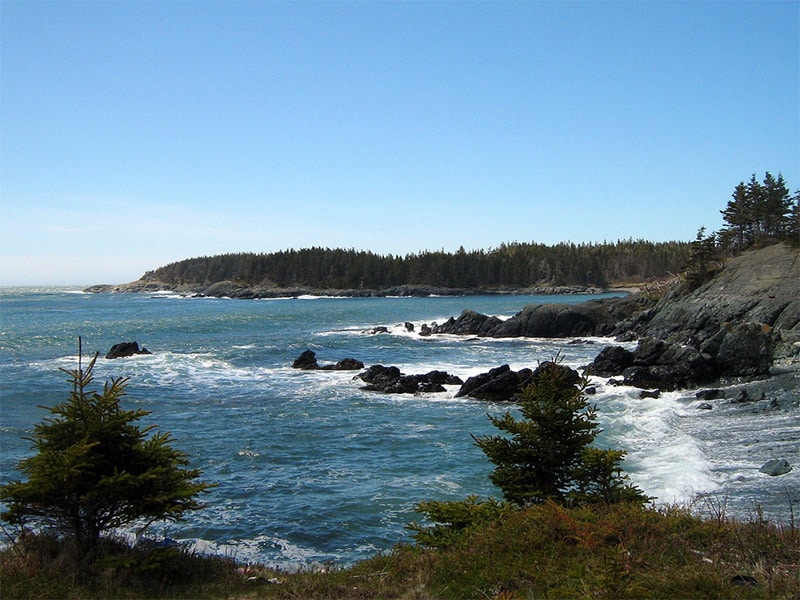 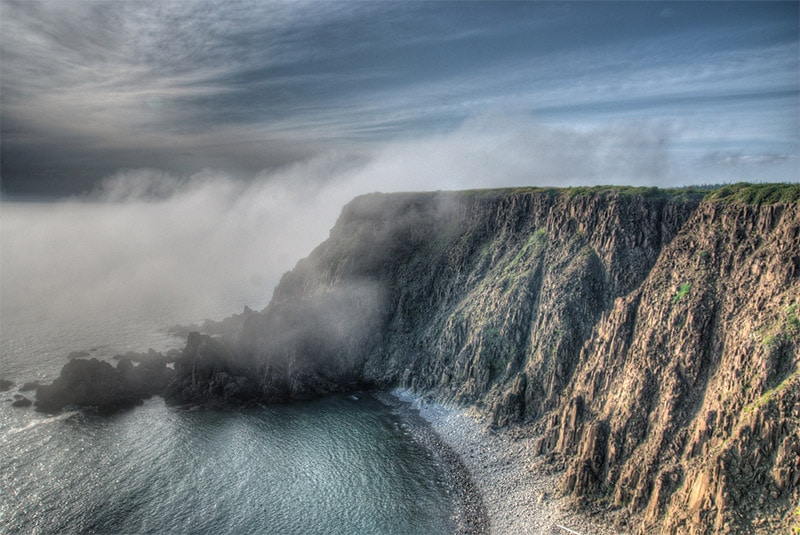 The Swallowtail Lighthouse is on Grand Manan Island at North Head Harbour, and not far from Hole in the Wall. If you take a ferry to Grand Manan you’ll see the lighthouse. This area features a beautiful rocky shore and is a great place to photograph. 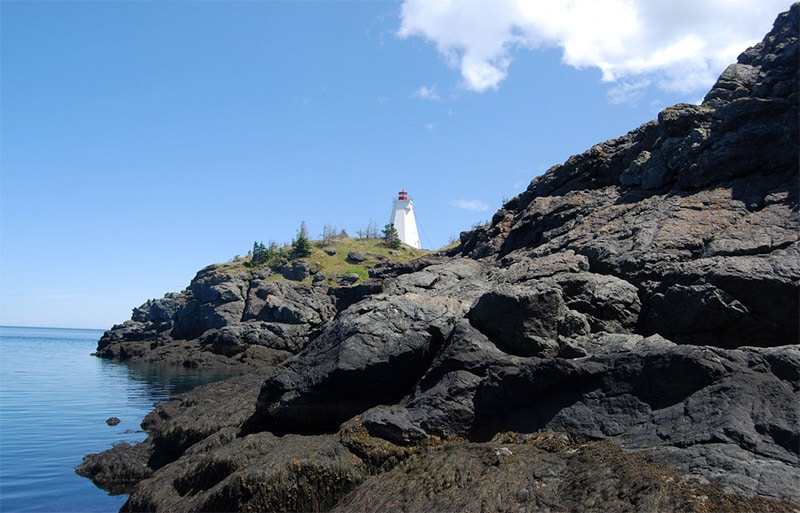 Campobello Island is at the south end of the Bay of Fundy, not far from Grand Manan Island. It is actually connected to the town of Lubec, Maine by bridge. Getting to Campobello Island from mainland Canada is more difficult, requiring two ferry rides. The island is home to Roosevelt Campobello International Park and Herring Cove Provincial Park. The beautiful island has plenty to see and photograph. There are several hiking trails at Herring Cove Provincial Park. At Roosevelt Campobello International Park, don’t miss the view at Liberty Point. 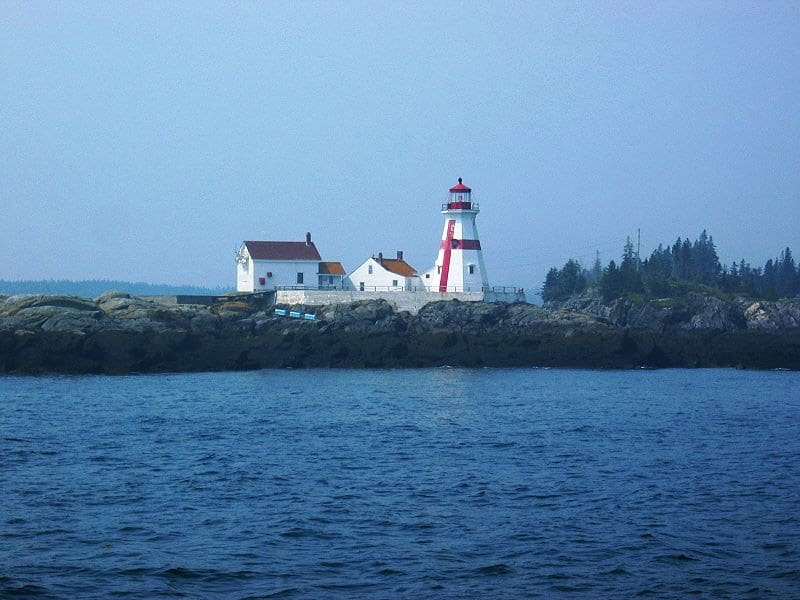 Irving Nature Park is along the Bay of Fundy, near the town of Saint John. This free park is an ideal place to explore and photograph. The park includes about 11 km of picturesque coastline along the Bay of Fundy, and it features marshes, beaches, and forests. There are hiking trails, boardwalks, and observation decks, as well as a road that goes around the park.

Cape Enrage is on the Bay of Fundy, just a short distance northeast of Fundy National Park. It is home to jagged cliffs that are very high in some places, and a lighthouse. The area can be accessed by route 915. 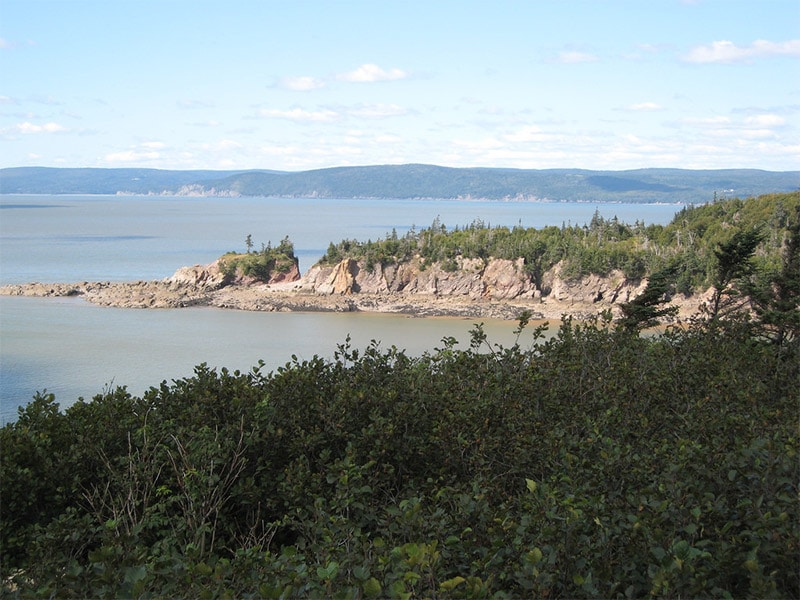 The Reversing Falls are a unique phenomenon on the St John River. This is a series of rapids where the river runs into the Bay of Fundy, and as high tide comes in the rush of water forces its way upriver, causing the reversal of flow. The rapids, or “falls”, wind up flowing against the current of the river.  It is best seen from Reversing Falls Bridge.

Kouchibouguac National Park is in eastern New Brunswick along the Gulf of St Lawrence. The park features forests, beach, sand dunes, barrier islands, salt marshes, and wildlife. The wildlife in the park includes birds, seals, moose, black bears, coyotes and more. There are many hiking trails throughout the park, including at Kelly’s Beach, a popular location. 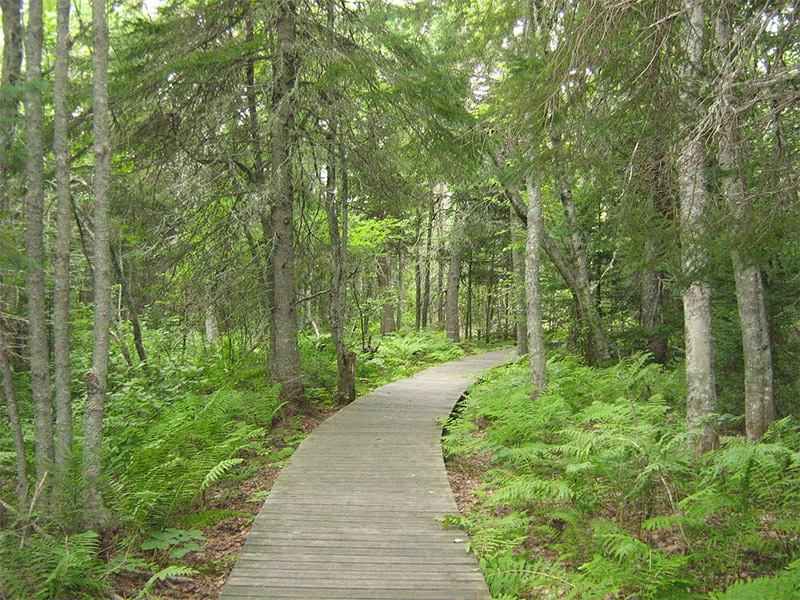 Grand Falls is in northwestern New Brunswick on the St. John River. This impressive waterfall is about 23 meters high. The Grand Falls Gorge is equally as impressive and beautiful as the waterfall. 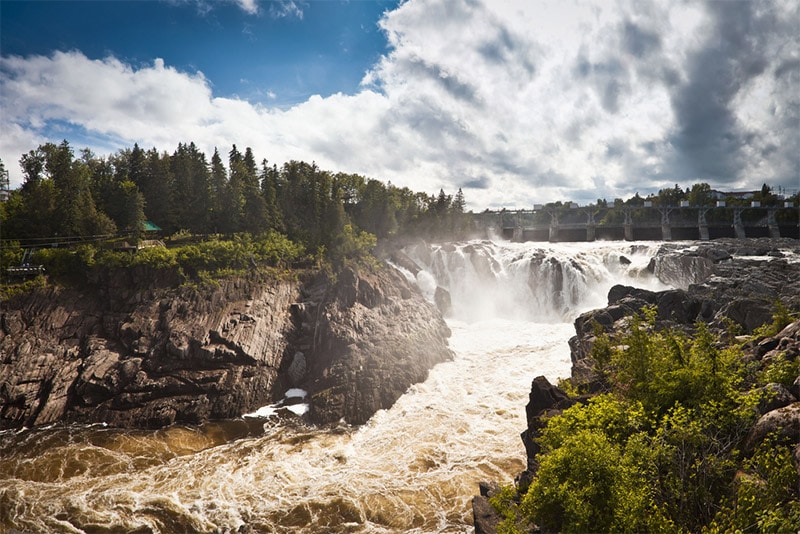 The town of St. George is in southern New Brunswick, near the Bay of Fundy. St. George is home to a beautiful gorge and First Falls, or St. George Falls. Near the falls is an old mill. 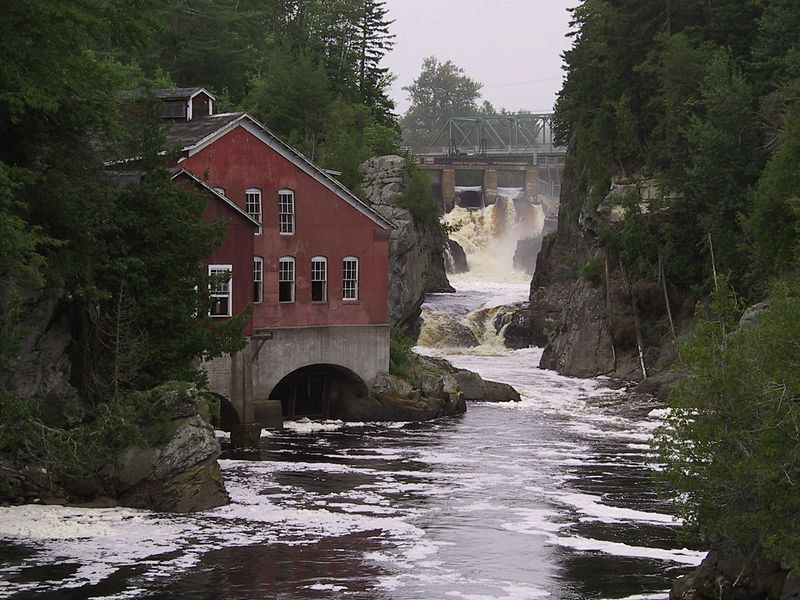 In southwestern New Brunswick, in the town Bear Island, Howland Falls is a beautiful waterfall that is fairly easy to access. There is a short trail that starts on Scotch Lake Road that lead to the falls. 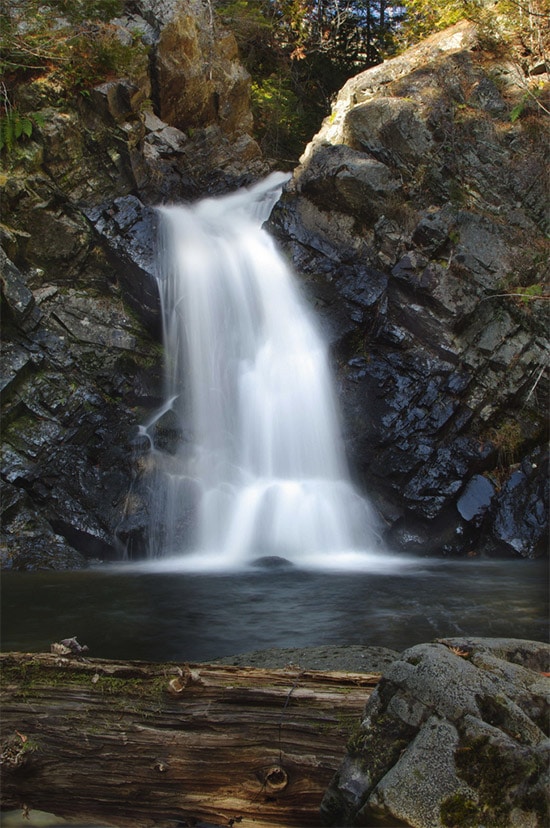 There are plenty of other great places to photograph in New Brunswick. We’ll be adding more to the page in the future, but please feel free to share your own suggestions in the comments. Some locations that we plan to add more details and photos of are: 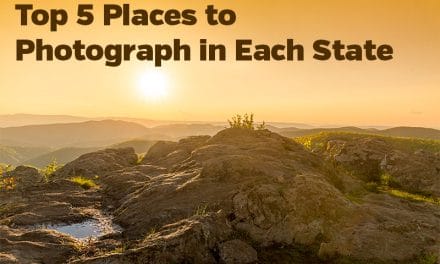 Top Five Places to Photograph in Each State (L – M) 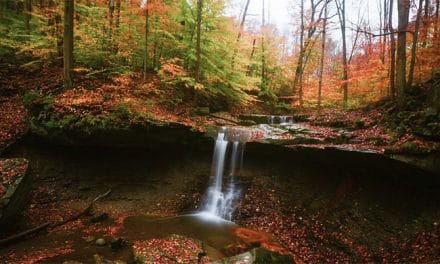 The Best Places to Photograph in Ohio 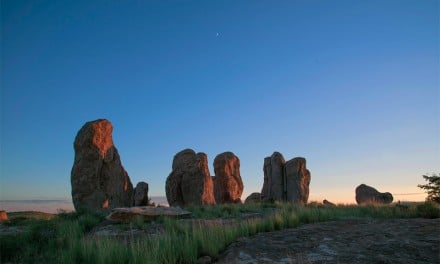 The Best Places to Photograph in New Mexico 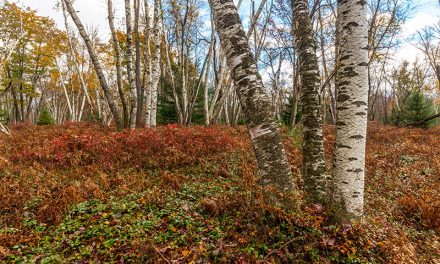