The Best Places to Photograph in Nova Scotia, Canada 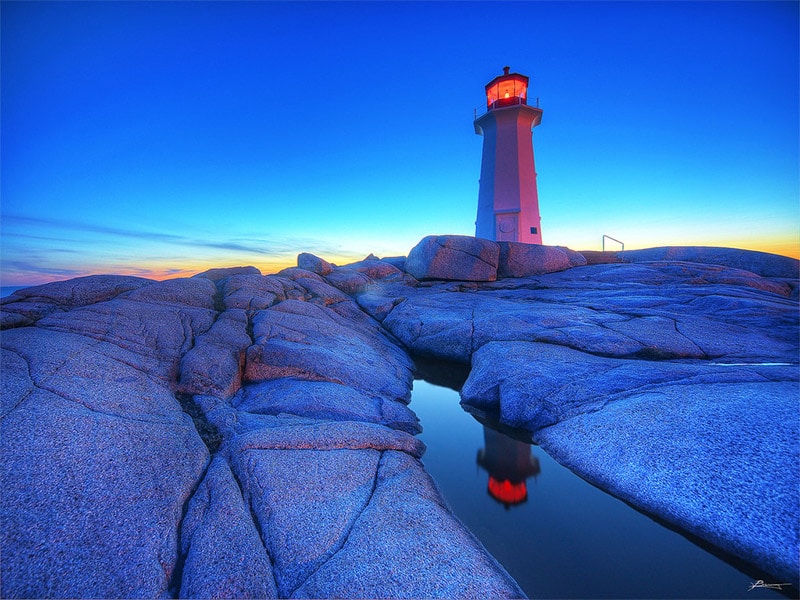 Nova Scotia is Canada’s second-smallest province, but it doesn’t lack  natural beauty. Located on the Atlantic coast, Nova Scotia is easy to access for the millions of people living in the northeastern United States.

In Nova Scotia you’ll find amazing, rugged coasts, beautiful wilderness, mountain views, picturesque small towns, and much more. On this page we’ll look at several highlights that are among the best places to photograph in Nova Scotia. The interactive map below shows the locations of places featured on this page.

The park offers about 15 different hiking trails, including the 56 km Liberty Lake Trail. The Port Joli Head Trail in the Seaside unit provides views of the rugged coast.

Kejimkujik National Park has been designated as a Dark Sky Preserve, so it is a great place for stargazing and photographing the night sky. 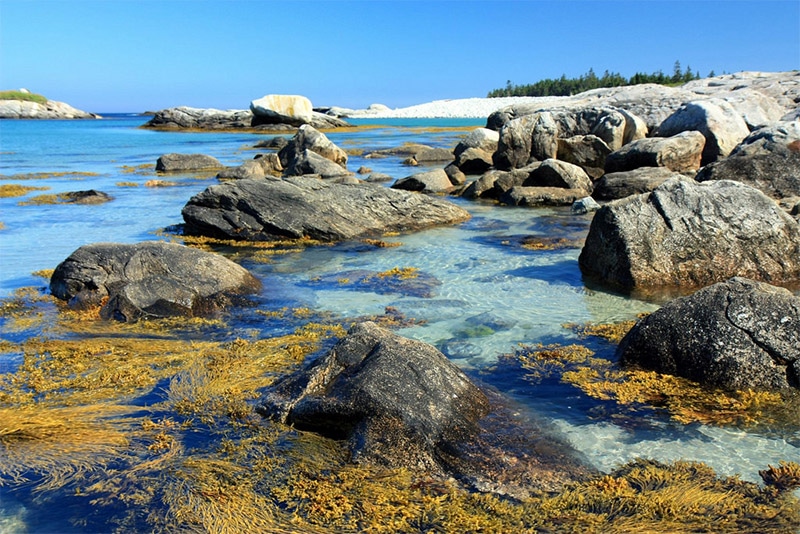 Cape Breton Island is separated from mainland Nova Scotia by the Strait of Canso and can be accessed by the Canso Causeway. The large island is also home to Cape Breton Highlands National Park, which is close to the northern tip of the island. With river canyons, steep cliffs, and amazing views of the Atlantic Ocean and Gulf of St. Lawrence, this park is a favorite for many photographers.

You can find plenty to photograph among the park’s beaches, forests, waterfalls, rivers, and wildlife. The famous Cabot Trail passes through the park (about 1/3 of the trail is in the park), providing some of the best views. 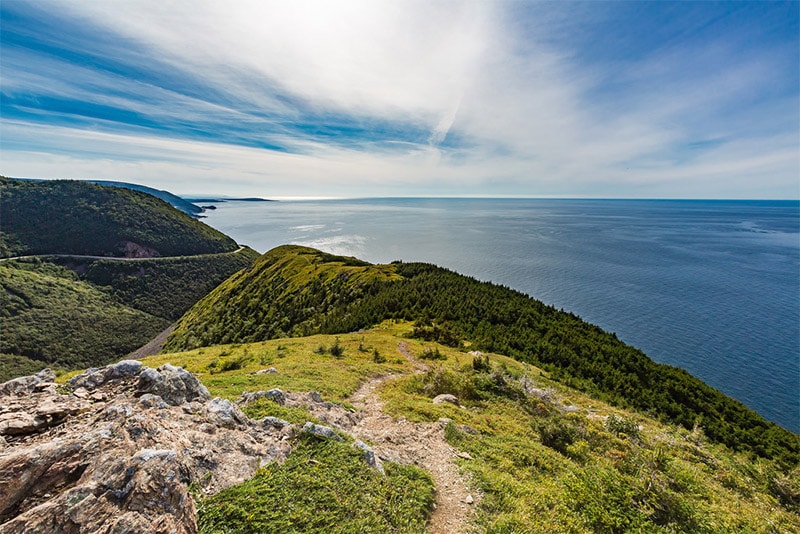 Cabot Trail is partially located inside Cape Breton Highlands National Park, but it is worth mentioning separately because it also covers much area outside of the national park. It is a scenic road on Cape Breton Island that is almost 300 km long. It loops around the northern part of the island providing many spectacular views along the way. There are plenty of overlooks and places to photograph. 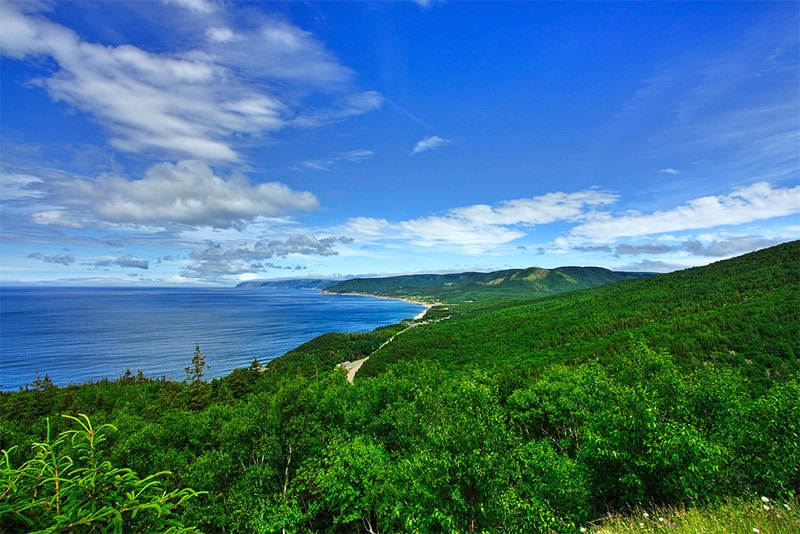 Kelly’s Mountain on Cape Breton Island provides amazing views of the surrounding area, including the Seal Island Bridge. Route 105 makes it possible to drive up the mountain, although the path is windy and steep. 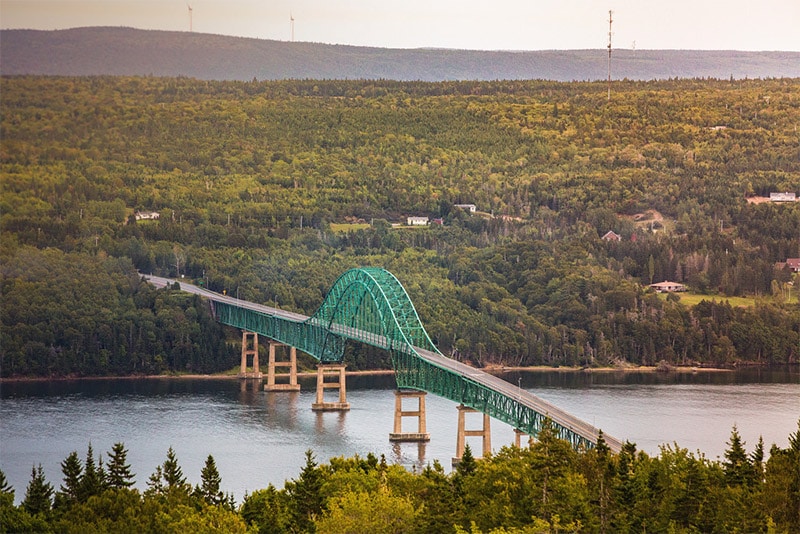 Kidston Island is on the Bras d’Or Lake, which is on Cape Breton Island. You can see the Kidston Island Lighthouse from the mainland, or you can take a boat ride to it in July and August. 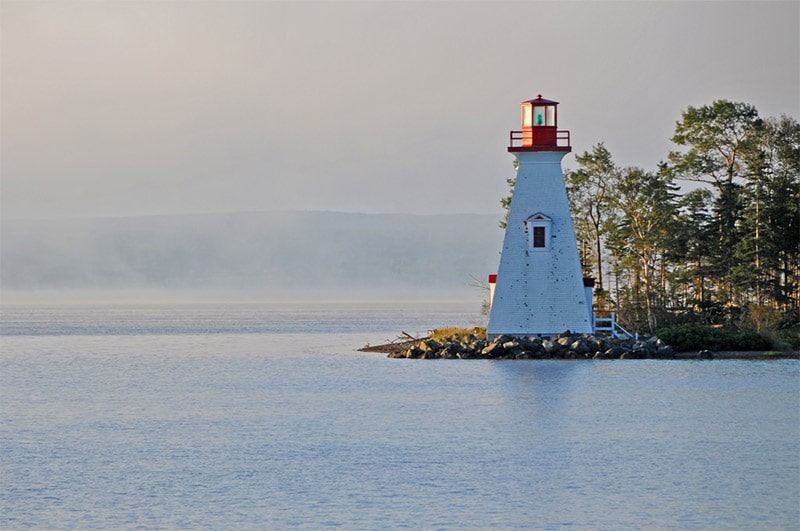 Sable Island is beautiful, but not easily accessible. The island is about 175 km off mainland Nova Scotia, and the entire island is designated as Sable Island National Park Reserve. Sable Island is home to wildlife, most notably the Sable Island Horse. Visitors can access the island by plane or boat, but weather can be an issue. The park is open only from June through November, and all visitors must register in advance. The park does not permit camping and only day trips are allowed at this time. 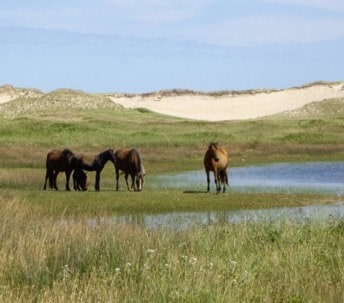 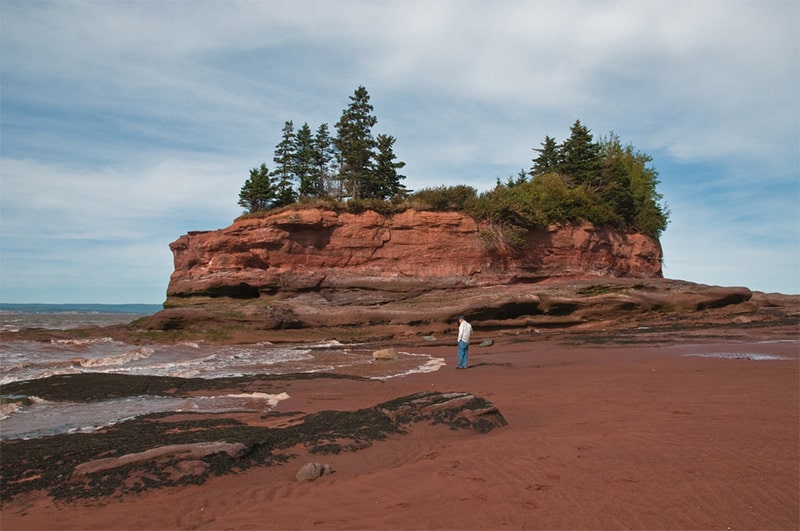 Bay of Fundy by Graeme Churchard / CC BY 2.0

Cape Chignecto is a headland on the Bay of Fundy that separates the Bay of Fundy into Chignecto Bay and the Minas Channel. Cape Chignecto Provincial Park is a wilderness park that features high, rugged cliffs (up to 20 meters). This amazing shoreline provides plenty of awesome photographic opportunities, with day hikes available to get you to some great views. The park also includes the ghost towns of Eatonville and New Yarmouth.

The coastline includes sea stacks and caves. Three Sisters is a well-known collection of sea stacks that rise above the water. Although access isn’t the easiest, this park is well worth the effort. 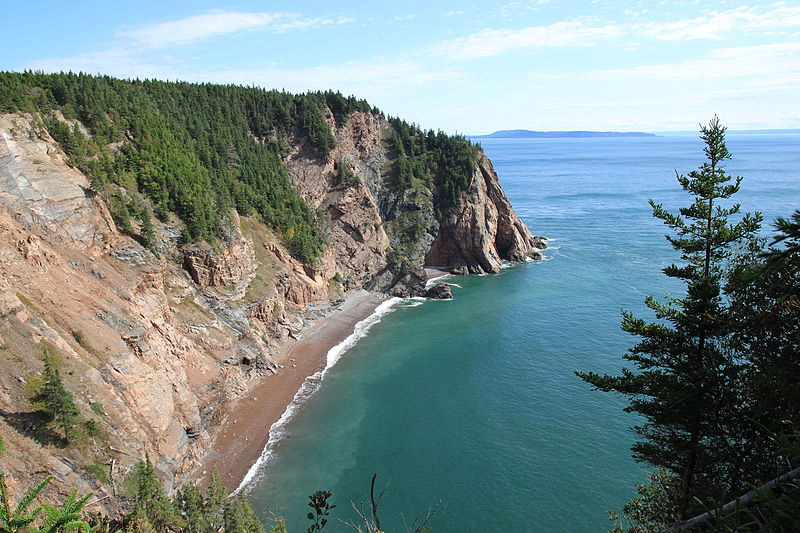 Cape D’Or is a headland on the Bay of Fundy, located southeast of Cape Chignecto Provincial Park. It is at the north of the entrance to Minas Basin. Cape D’Or features amazing cliffs that rise as high as 200 meters. You’ll also find a picturesque lighthouse here. While most of the cape is heavily forested, the area surrounding the lighthouse is clear and provides excellent views for photographs. 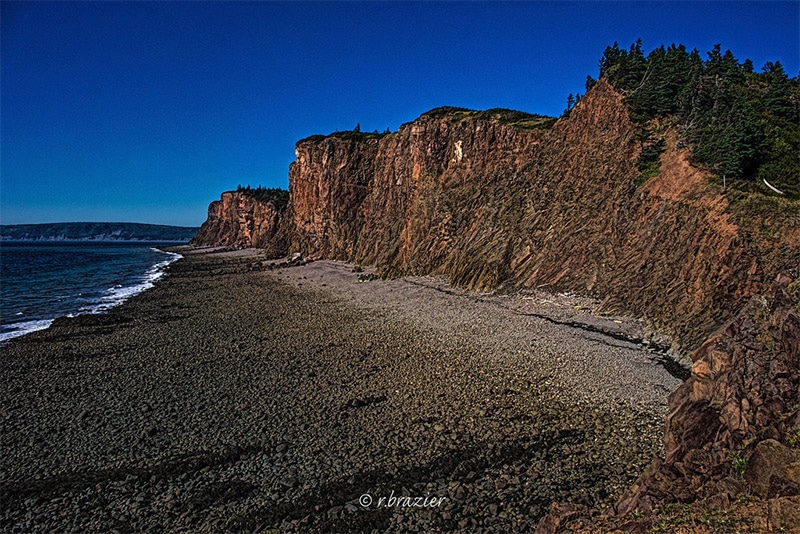 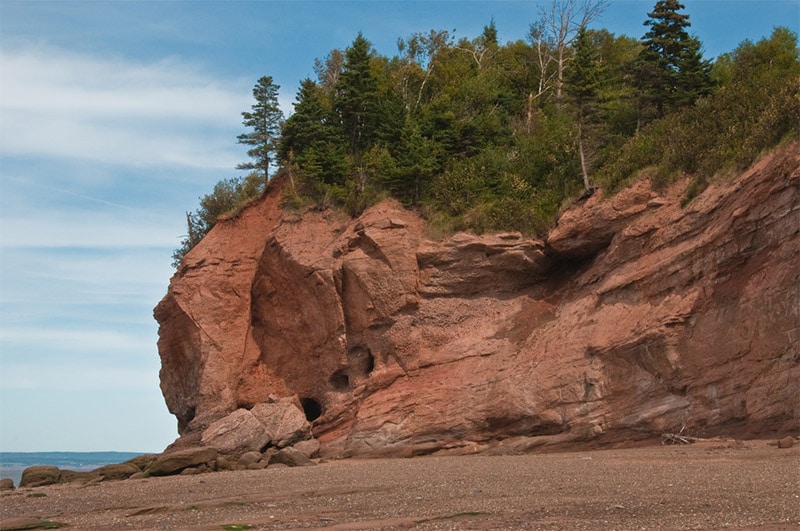 Tennycape by Graeme Churchard / CC BY 2.0

Blue Rocks is a small town on the Atlantic Coast of Nova Scotia. It was originally a fishing community but has become increasingly popular with artists and photographers for its unique beauty. It is located east of Lunenberg. 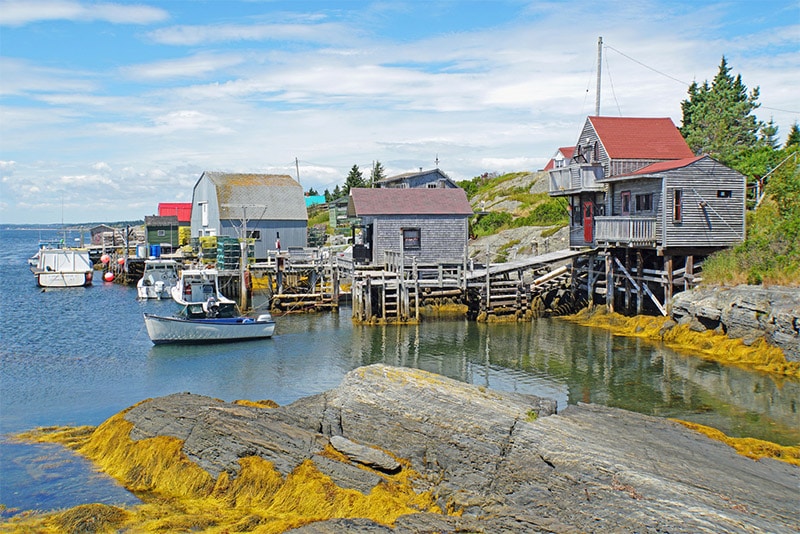 Mahone Bay is a small town a short distance northwest of Lunenburg. Many photographers love the view across the bay of three churches. 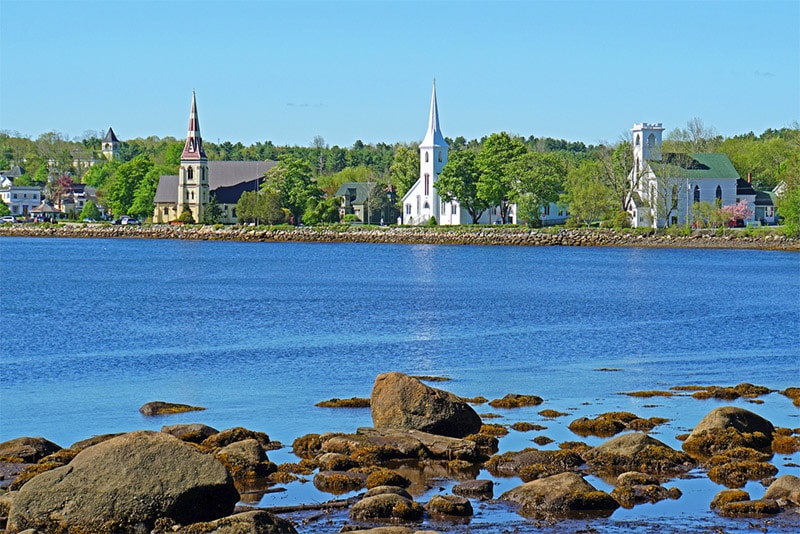 Peggy’s Cove is a small community along St. Margaret’s Bay northeast of Lunenburg and Blue Rocks. This picturesque area features a rocky coast and a well-known lighthouse, Peggy’s Point Lighthouse.

Cape Forchu Lighthouse is located near Yarmouth along the southern shore of Nova Scotia. It is on a rocky coast that makes it ideal for photos. You will find 19 acres of park surrounding the lighthouse. The park is open to the public from May through September. Leif Erikson Park, at the southern end of the property, includes walking paths and great views. 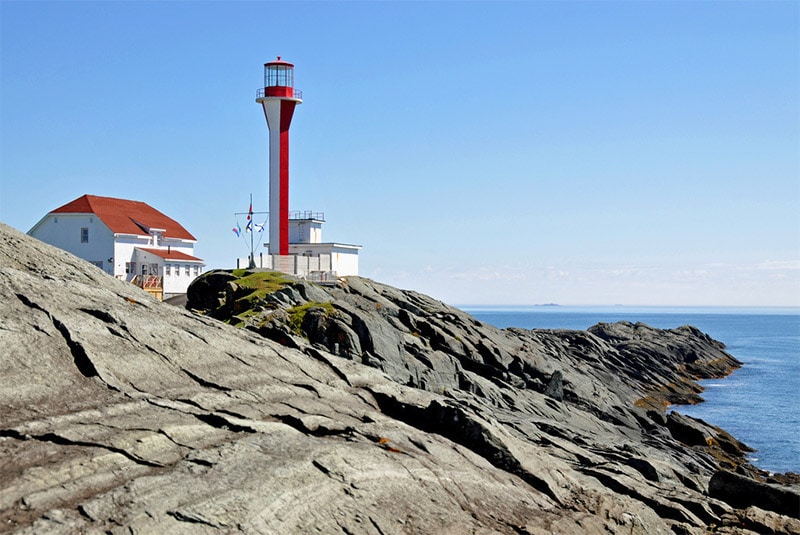 Excellent cityscape views can be found at Halifax Harbor, as well as views of the MacDonald Bridge. 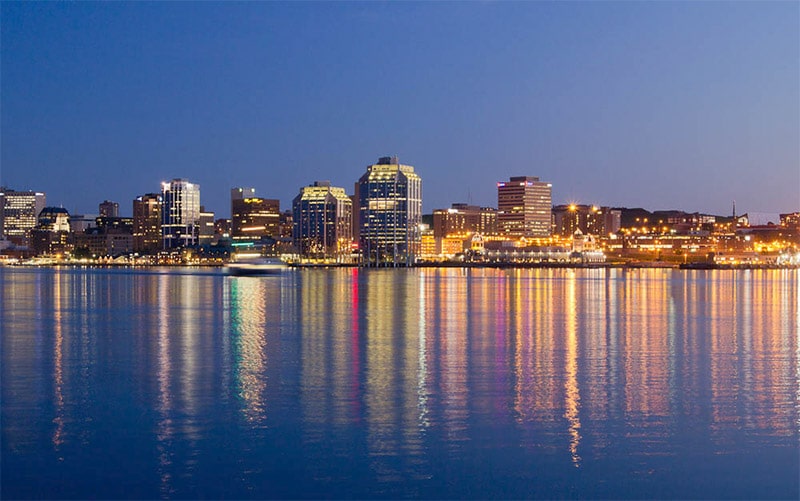 Smuggler’s Cove Provincial Park is in southwestern Nova Scotia and provides great views and photo opportunities. At high tide the cove fills up, but it is accessible at low tide with a set of 80 stairs leading the way down. 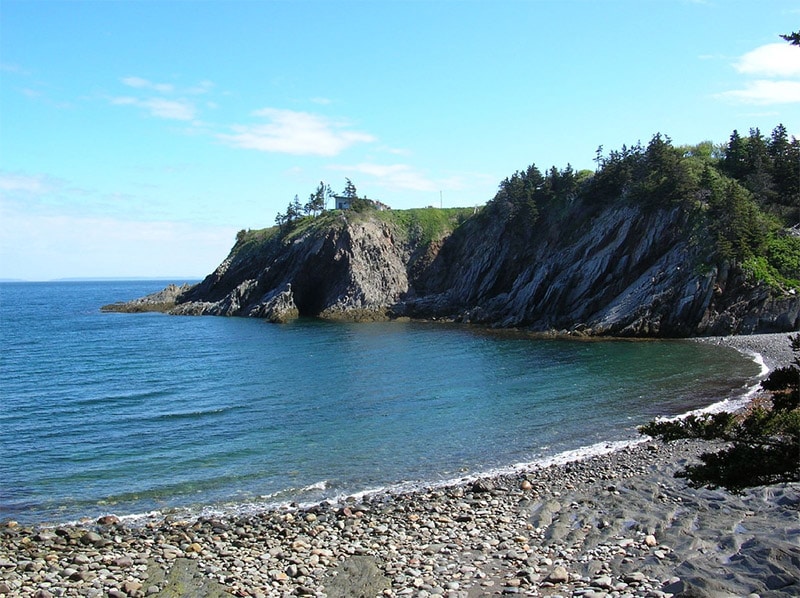 Nova Scotia is a beautiful area filled with plenty of possibilities for photographers. The locations listed above are only some of those possibilities. Other locations of interest not shown by photographs on this page include Wentworth Falls, Dawson Brook Falls, Conrad’s Beach, Martinique Beach, and Meat Cove.  Feel free to leave your own suggestions in the comments. We will update this page from time-to-time. 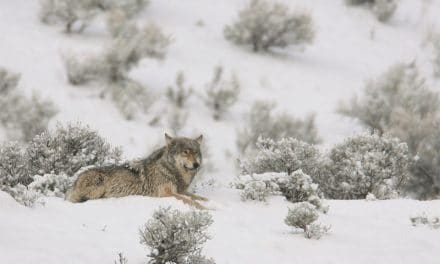 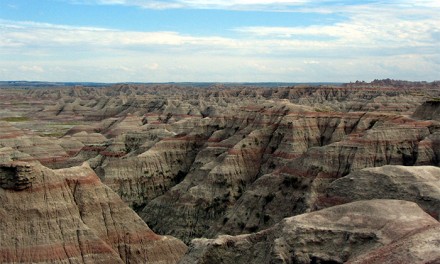 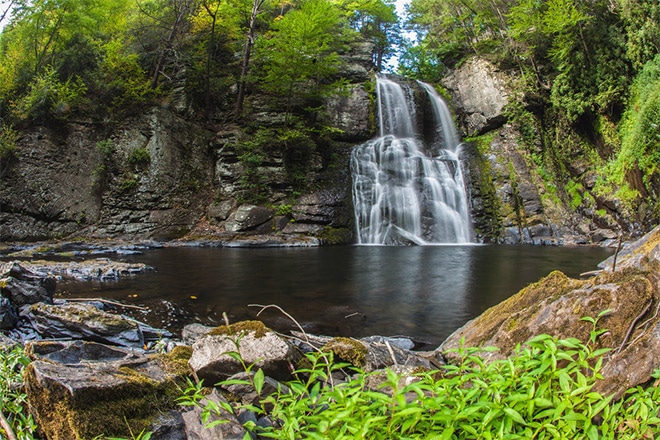 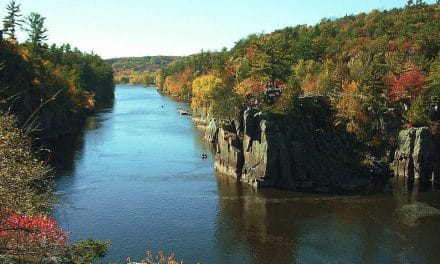 The Best Places to Photograph in Wisconsin